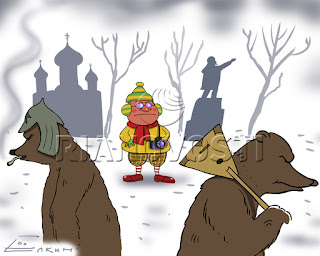 Would it be possible for me, an outsider, to, over time, become accepted by the Russian people? I'm not saying I expect to be accepted as one of your own, but just to be considered another person, friend etc there. I really hope to be accepted as a person there and not "the outsider".

My second question was: as I said, I want to go into writing when I have finished my education, probably as an author of books or something in philosophy, perhaps reporting if those two are not doable, but my main area that I really aspire to do well in, is teaching. I was wondering if there would be a lot of acceptance for a person like me with that kind of job, and whether I would generally be successful in your country with something like that.

I always believe that majority of our problems, when we are trying to settle down abroad, are related to a simply bad communication or absence of knowledge of local "communication codes". So I'll try to list the most important ones. 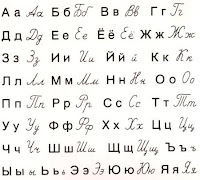 It is true that integration process if not easy in any country even if you think that you know a lot about traditions and people. But I will not be very original indication the main key for integration. Knowledge of RUSSIAN language will be the most important key on your way of being fully integrated into the society.

This applies to any country, but for the one like Russia where according to the State statistics only 5% of population speaks English, knowledge of Russian will open you many doors..including those of human hearts ))))

Another key would be the TIME. Once again in order to be accepted by the people...you'll have to spend your time with them )))). It seems obvious but as a long-term expat I have to admit that the most obvious things are the most difficult to handle.

It is always very tempting to stay close to the expat community which is welcoming and understanding....but if you close yourself with those who are just like you, you'll arrive to the point where people around you will be complaining about "complicated Russians" while doing nothing to break the fence they created around themselves. (P.S. I have met a friend who in order to integrate had purposely cut all communication with compatriots to the strict minimum and in several years was completely adapted to the local life)

It is true that people are different but when you hit an inevitable low point of your stay in Russian it is important to remember, that it was YOUR choice to come to Russia and it is up to you to make a bigger effort.

I always found Russians rather friendly and loyal as friends...but would not deny the certain idealization of the Western people.

Another success key would be asking people questions or advice when you don't understand something. Don't suppose that you can get it yourself and don't hesitate. Usually, they 'll help...or at least one of them will ))) And that might help you to meet a new friend.

Now to answer your second question....

I really don't know what to say. Teacher is always a demanded profession....but being a writer of philosophy books ???
The success of this project, I am afraid, wouldn't depend on the place of your residence, but on the content of your work.

Hope I answered your questions. So please don't be discouraged or demotivated if you found my advises hard to follow. I am sure that you won't be disappointed coming to Russia.

Besides, the good thing is that you won't be alone, trying to integrate the Russian society. As you could see from the listed below charts there will be officially at least 10 0000-12 000 people (from non-CIS countries) per year who would ask themselves the same questions. 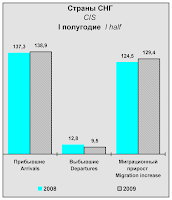 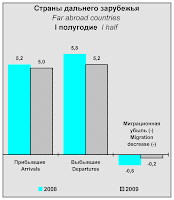 Posted by Ask a Russian at 9:21 PM No comments:

Most popular car brands in Russia (2009)

What are the most popular car brands in Russia?

I would love to give you some dynamics of development of this interesting subject but in order to save some time I will have to stick to 2009 only covering the market of new cars. (
"The used ones" preferences are really hard to cover as the popularity really varies from one region to another (The Far East - Japanese brands, European part- German brands or so )))) 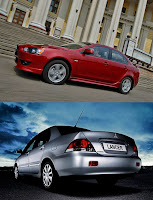 Sharp recession has touched almost all companies.
It was especially severe to the traditionally popular in Russian Far East Japanese manufacturers. The Very high exchange rate of yen to dollar and Euro, not to mention the Russian ruble forced Japanese manufacturers to raise the prices for the car production.
As a result, the decrease in sales in 2009 for major Japanese car manufacturers was dramatic for Honda -72 %, Toyota -64 % and Mitsubishi -63 %.

It also cost Toyota two places in the rating of the most popular in Russia car brands, and now it is only the sixth, Mitsubishi has dropped 3 places and was only 11-th, and Honda from 13-th place has dropped to the 19th. It is a bit better for other Japanese manufacturers - Nissan, Subaru, and Mazda, but their parameters for 2009 also stay below market average: decrease was 56 %, 57 % and 59 % accordingly. 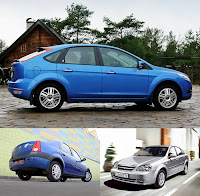 Some producers, like Saab and Chrysler, for example, even had to close their car production facilities for Russian market, others, like Alpha Romeo, wished this year finished soon seeing the sales dropping to minimum (62 cars in first six months of 2009). The bad state of sales for all three brands of American Chrysler Group for 11 months of 2009 has resulted in -86 %. With the only one exception - the Hummer. Although Americans have sold this mark to the Chinese - the cars for Russian market were assembled in Russian Kaliningrad, that (together with the price reduction) helped the growth of sales of this huge off-road cars +74 %.

Despite the rather stable position of premium- brands, Volvo and Saab have suffered a significant drop of sales - 66 % and - 71 % accordingly.
Still there was a company which managed to show during this crisis year an outstanding result on Russian market: Citroen (growth of +6 %). Citroen has overcome in this year Mercedes-Benz, Subaru, Land Rover and some other companies and climbed in ranking from the 31-st to the 23rd place.

The 2009 crisis of sale has practically left untouched "the big German three ": BMW (-13 %), Audi (-12 %), Mercedes-Benz (-29 %). They now have headed the premium-class brands, having thrown off the pedestal Volvo and Land Rover.
After transferring to the factory to Kaluga (Moscow region) production of almost all brands of Volkswagen and thus absence of high customs taxes Germans managed to keep the prices for the cars on a good level. During 11 months of 2009 VW has sold 36,500 cars and has risen from 17-th to the 12th place in rating. Drop of sales VW was only 19 % - which was one of the best parameters of this crisis year.

Other car brands worked hard to keep up the sales.