Russian farmers during winter...what did they do? 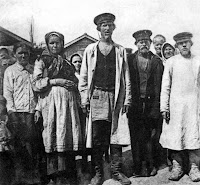 I am doing some research into farming in Russia around 1914-1917 (focusing on pre-Revolution era) and I am really struggling to find out what farmers would do during the winter months, specifically in areas which receive a lot of snow?

I guess farming the land wasn't possible, but I can't find any information on what they would have been doing during winter. I understand that some workers would travel around for work, but I'm interested in those who would have owned their own farms and stayed there all year (kulaks I think?).

First of all I need to explain the Russian term "KULAK". (Kulak - eng. FIST)
This word (which has very negative meaning in Russian) describes the richest farmers (of the beginning of the XX century), who outsourced labor for heavy works and who were lenders of money and material to less fortunate neighbors.

A LITTLE BIT OF HISTORY
Climate dictated habits & traditions of all nations. If Russian were engaged only in tilling the soil or wheat processing, the people would disappear either from cold or famine. That is why the unique nature of Russian plan required plowmen to adapt two types of the economy - the summer one and the winter one.
SUMMER vs. WINTER
The objective of summer economy was to support the family with «agricultural activity».
The objective of the winter one - was to get the income « from the crafts/business activity ». If the frost took care of the land in the winter the Russian farmer had nothing there. He had to be involved in some kind of business.

In fact, the budget of Russian peasants consisted of only 50-75% of their agricultural work. The other 25-50 % of the income came from "trade or business".
BUSINESS
Majority of men went to towns with own horse to become temporary cabs.
However many young families couldn't permit themselves to own a horse as it was very expensive to own an animal in the winter.

Others went to towns with the other men of their village to be hired for temporary works (carpenters, blacksmiths, etc). They tried to stay close together and formed ARTELs (or cooperatives).

That is why there were very few healthy young men left in the villages during the winter, if not to say NONE
MEANWHILE IN THE VILLAGE........
The majority of families consisted of women and older members of the family with children.
P.S. So I am afraid Abby, I won't be able to bring any news to your research. HELAS ! ....no new info here 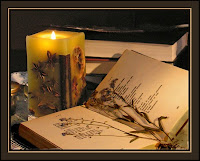 I was told that it's a Russian tradition to keep a flower in your book, just to have it with you. What is that called in English and Russian?
Asked by Stanley

Well, for the first time I have to admit that this statement is wrong. Tradition is not Russian, but European.

Keeping dried flowers in the books is called Herbarium (Latin herbárium, from herba - "grass") - a collection of dried plants kept according to certain rules. Typically, the plants for herbarium after drying are put on sheets of paper.

The first herbarium appeared in Italy in the XVI century. Their invention is related to the invention of paper is attributed to the doctor and botanist Luca Ghini, founder of Pisa Botanic Garden. Herbarium of the Ghini has been destroyed later, but the collection of his close friends is still kept in museum.

FROM THE PERSONAL EXPERIENCE

In the elementary school, we collected leaves, ironed them to make them dry and pasted into an album signing the name of the tree.This ritual is known to all people who went to the schools in ex-USSR. After the first year experience collecting just leaves, next season we would have dug the plant by the roots, dried, pasted on sheets of cardboard and then added a list of type description...and couple months later this whole album would finish in the garbage )))))))

I have to say that keeping a flower (especially which was given to you by a person you've loved) in the book is so old-fashioned. Russian famous poet of XIX century Mr.Alexander Pushkin has devoted several poems to this tradition. 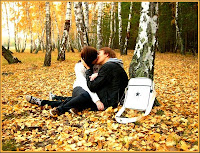 We all know that teenage loves rarely last and make fun of Pushkin love poems. ..........But frankly wouldn't you feel a little pinch in the heart if opening the book you find a dry flower - witness of a forbidden kiss, for example?? ))))))))

Posted by Ask a Russian at 8:45 PM No comments: