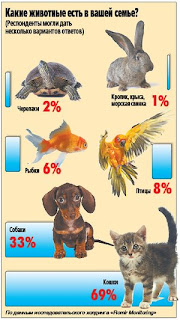 How do Russians feel about pets? What are the most popular pets in Russia?

OFFICIAL INFO
According to the latest 2010 sociological studies (not reflected on the picture) (http://www.amic.ru/news/120790/) 56 % of Russians own a pet. 57% of owners are single people and 56% are married couples. 25% of people blamed their love for pets on the tradition, 22% believe that pets help them to be less stressed, 14% admit that a pet helps them to feel less lonely and 10% had been convinced by their kids.

Interesting to mention that the older the owner is the less demanding he is for the race of his pet.
29% of Russians claim to be happy with an outbred cat and only 8% of owners have a cat of a special breed. (Does the affection has a race??))) 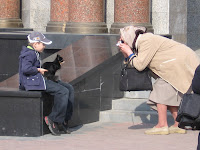 Every third Russian citizen owns a dog. Just live previous case, 19% prefer an outbred dog to 11% of those who prefer a pedigree one.

And only 4% of people give their love to a goldfish (Do we still believe that they make the wish come true?))), 3% to an in-house birds and 2% to other small animals (hamsters, turtles, etc).

Oh... pets! What would it be like our life without them??? )))) Who of us, growing up in small apartments didn't dream of having a pet. 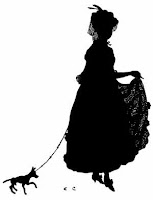 Well, not even kids )))) Still how many of Russian girls wanted to get a little dog after watching a film on A. Chekhov's "The lady with the little dog"! )))))))

Even those who's finances or flat size don't allow to have a pet at home (and according to the statistics : 43% of population) find their way to fill this gap of affection and express their love to the fauna (well, according to the means and age, of cause)))).

Well, I don't want to idealize the situation. Helas, it is true that Russia remains one of the few European countries where you still see wild pets living on the streets, many of which just like in other countries were abandoned by the owners... This of cause has nothing to do with the national qualities..as everywhere it is related to the human characteristics of a person abandoning his pet.

My Russian girlfriend is extremely attached to her grandmother. She can call here everyday. Sometimes it is rather annoying...but her friends seem to be cool about it. Is it a cultural difference or just her? Asked by Christian


Well, I don't know your girlfriend and cant say if she is over obsessed with her grandmother ))) But frankly, I would say that this will be rather normal behavior for a girl who was raised by her grandparents. Don't stress (!), it doesn't mean that she didn't grow up. Maybe like many children who were born in Soviet (or post-Soviet) country she just probably never had a nanny and was raised by her grandmother.

To have an extra help in raising kids in Soviet culture was considered "bourgeois" and highly suspicious. People had neither money nor services available. So since almost all mothers had to return to work when the child was 1-3 years old, the kids had to be put in the nursery or left with someone from the family. 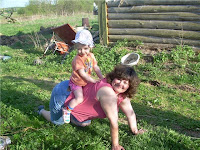 This special someone was often a grandmother. Quite often a grandmother-to-be would retire when her first grandchild is born...And she will begin a new full-time job with no term of retirement )))))
It will be grandmother who will be replacing mother/nanny/siblings for many kids.

She will be the one who will spoil, teach, congratulate the first!

....This of cause can (and often does) cause a serious tension between a mother and a grandmother . Who one wants to share a love of a child? )))

Still if you want to know how people of ex-USSR feel about their babushka. Ask them who was their babushka...and you will a right to see a tear in their eyes, smile and a long story of the best kotletki (meatballs) ever!!!!

P.S. So don't be surprised, if your Russian mother-in-law will be against hiring a nanny when you have a baby and will be ready to take full care of YOUR child ))). She knows that her effort will be fully paid back.

She will be loved by her grandchildren and......they will be cuddly until a very mature age )))....and will memorize every moment spent together (on the datcha, for example)