Arrivial of a newborn in Russia 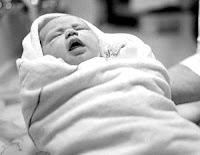 I'd like to know ...who cares for mother and baby the first days after birth. Is it the family, like grandmother and aunts, or a nurse?
Is there any difference between giving birth in a city or at the countryside?
And what's the role of the father? I found a site which said that fathers after the birth of their child the whole night go boozing with friends, but I thought that rather unlikely.

Next, is there some party for the family, friends, and neighbors or can they visit whenever they?
Are there special gifts you give the mother and child?
And is it still a custom to wrap the baby?
Asked by Maud, Holland
This is a big subject, but I'll try to summarize everything in several short paragraphs. 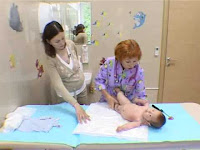 Indeed, the world surrounding the birth of a new person rests in Russia purely the women's world. I will disappoint you to say that not that Russian men don't love their newborn children.... it is just rather cultural to leave the pregnancy and everything concerning this mysterious process to the women.

Social studies prove that majority of Russian women won't expect the father of their baby to accompany her through the pregnancy to doctors or even to be present at the labor room.

You will be surprised, but chastity and timidity would be the right words to describe the feelings of both sides.

Majority of women would have their babies in the official medical establishments where they will stay from 5-7 days after giving a birth (this, by the way, allows woman to rest) and just few would prefer to have a labor at home under the supervision of a midwife. Rural areas won't be much different from the towns.
The level of comfort could vary .....but this will be true for any other country.)))))

One important issue would be the restriction on the visits in the neonatal section of the hospital. In many places, even fathers are not welcomed. Hygiene standards don't allow any foreign infection in the hospital. So grandparents, friends, and relatives will have to wait until the newborn is allowed to go home with his mom. 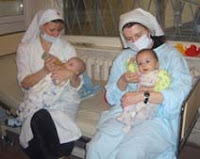 ...And that is why in every family you will have a picture of them on the stairs of the hospital accompanied by a woman wearing white robe holding wrapped pink of blue blanket ))))
Thus, the midwife presents a new member to the family! 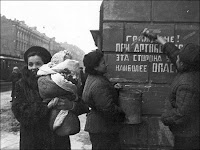 ...And yes, we do wrap our babies for the first several months of life ))))
TRADITIONS & SUPERSTITIONS

The modern life and technology definitely entered life of Russians, but there are some traditions and superstitions which survived all: Tsar, Soviet, and any modern times influence )))

1. During the pregnancy, a woman should not eat in secret (hiding). If she does so: her child could be born fearful. 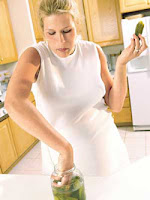 Modern EXPLANATION: Such desire can appear either in case of food deficiency (which in our time is, fortunately, rare), or in case of eating “forbidden fruits”, for example chocolate or oranges, which can be considered as allergic for the baby. .... (Still not clear how could it make the kid fearful)))

2. Never mention that you are pregnant, except to a father of a child and a doctor! Until stomach becomes noticeable, a woman should not mention to anyone her pregnancy. ...Grandparents, friends included.
Modern EXPLANATION: This very ancient popular belief. Once there was an entire “system” of rites, which helped a woman to conceal the pregnancy from the evil spirits, which aimed to harm an unborn baby. Women wore husband's shirts, worked as much as others to hide her pregnancy especially from those, among whom could hide anyone with a "bad eye".

Nowadays contemporary psychologists recommend following this advice in certain cases (especially when there is a threat of the miscarriage). The reason for this is not in “being jinxed” but a probable natural miscarriage during the first term. If this misfortune happens, the possible questions on the state of mother's health can traumatize woman even more than the event itself. 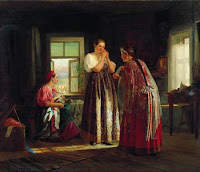 4. Pregnant mother shall not touch domestic animals. A pregnant woman must not play with the cat, even take it into the hands, in the child will otherwise be many enemies. 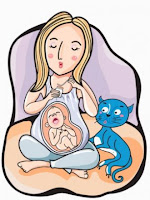 Modern EXPLANATION: The discovery in XX century of toxoplasmosis, a very dangerous disease for future moms, which is actually transferred by cats, cleared this superstition.

5. No clothes or toys or anything shall be bought or kept in the house where the pregnant woman lives. If grandparents or father buy anything they shall never show it to a future mom. Everyone pretends that there is no change coming in the family's life. Father will have time to get it all once a baby is born. That is what he is doing together with all aunts and grandparents when mother and a baby rest after the labor.
6. A woman shall not cut her hair during the pregnancy. (I couldn't get a decent explanation why).

7. No stranger eyes should look at the baby until the child is the 1-2 month old.

There are no traditions of any baby shower in Russia. Presents are just given to the parents at the occasions.
Usually, the first party would be organized for the christening (if the parents plan to baptize a baby) or for any other close holiday (New Year/birthday of a member of a family). But more often you will not be invited to the house. Once again - "no infection in the house" is needed.

P.S. Hope, it covers more or less all of your questions. As for the father's drinking all night long after the day when his son was born. You know, I am sure this is not only Russian tradition...but who would blame the happy dad? )) 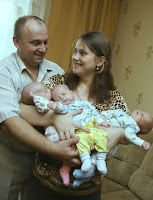 Can you tell more about ice hockey in Russia. Is is as popular as we think. Thanks.
asked by Anonymous

Well, I don't know where to start....I'll start with a history because you will be surprised to learn that this strong love for hockey is rather young )))

Before 1917 the ice hockey was not really known in Russia. Several sport clubs made an attempt to break into a new winter sports competitions and in 1911 Russia entered International ice hockey league created 3 years earlier. However the puck did not manage to become popular and quit soon All-Russian hockey union leaved international Ice Hockey League.

The history of hockey in Soviet Russia began rather after 1917 with an extreme popularity of field hockey (called then “bandy or Russian hockey” http://en.wikipedia.org/wiki/Bandy#Russia).

In the beginning of XX century this game was especially popular among women.
The ice hockey was rarely played and only by the students of sports universities who were supposed to study all types of sports. Ice hockey was an outsider among sports favored by Soviet youth until after the WWII when in 1946 Soviet Hockey league was founded.
http://en.wikipedia.org/wiki/Soviet_Hockey_League

On April 1st, 1952 the Soviet Hockey league joined International Hockey League to become one of the best performer of this league.

Suddenly this winter sport became so popular that all Russian boys became obsessed with "the stick & puck".
It will be only fair to say that this popularity was provoked by success of Soviet hockey team which won 7:3 its first World Championship in 1954 beating Canada and 4:0 over US team in 1956 Olympic games in Cortina D'Ampezzo.

Suddenly every boy in USSR wanted a hockey stick for New Year or birthday. No wonder, in 1960-70th everyone was talking about Russian ice hockey dream team.
After seeing breathtaking success and foolhardy behavior of their players on the ice ring Russians considered this sport as "the one for REAL man" and all over the country little boys sang the song Coward doesn't play in hockey ("Trus ne igraet v khokkei")

These people were more then movie stars their faces were all over the news and they were considered as the heroes of their times. They were dashing players and adored by everyone. Wikipedia mentions 4 Soviet players who marked those times:

"The IIHF Team of the Century included four Soviet-Russian players out of a team of six.
Goalkeeper: Vladislav Tretiak,
defense: Vyacheslav Fetisov
and forwards Valeri Kharlamov & Sergei Makarov who played for the Soviet teams in the 1970s and the 1980s were voted on to the IIHF Centennial All-Star Team in a poll conducted by a group of 56 experts from 16 countries."

Collapse of the USSR meant hard times for the national ice hockey.
1989 was the first year when Soviet hockey players began leaving the country searching for a better pay and the weakened team was not as performing as during the Soviet times. It took almost 15 years of ups and downs and searching of new team and coach for Russian hockey to show stable successful result in World championships: 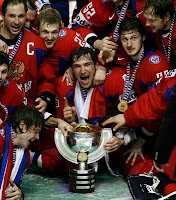 Now everyone is waiting for the results of upcoming 2010 Olympic games in Vancouver and Russia hopes to add medal to its Olympic gold medal list in ice hockey: 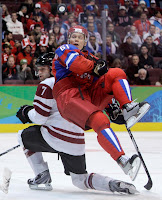 According to statistics Russia has a total of 77,702 players, about 0.05% of its population. Who knows, maybe soon we will see Russian girls ice hockey team (participating in the world championships since 2007) showing surprising results. 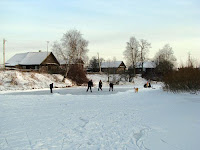 Meanwhile healthy outdoor sport wins over indoor ones during the long Russian winter and parents willingly put their little kids to learn the rules of this taught game ))))
Posted by Ask a Russian at 5:07 PM 2 comments: